← more from
Off Tempo
Get fresh music recommendations delivered to your inbox every Friday. 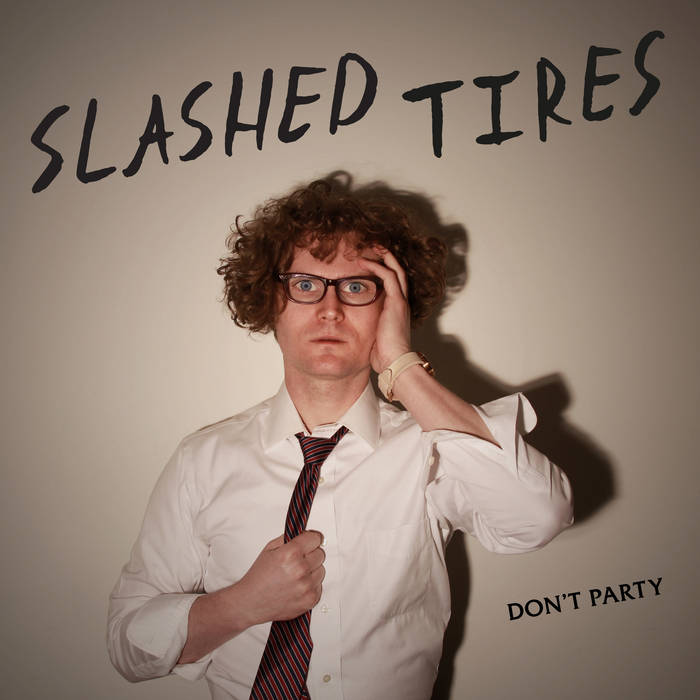 yeslisoyes problems and the hair flip And a couple other few get my butt animated And I do love detonator but I choo choo choose condensation because I am a moody m*********** and I love this dreamy moody space thank you. Favorite track: Condensation.

Have you ever gone out and asked yourself, “What am I doing here?”

What about “Am I dancing because it’s what someone wants me to do, or because I want to dance?” or “Am I trapped in a trying, crappy limbo in which I fail to connect with other people? Is this where I truly want to be?”

Don’t Party, the debut album from Slashed Tires, is the sound of these questions being asked and dissected in real-time. It is a collection of twelve songs exploring one’s inner monologue, the ups and downs of friendships, and the unfulfilled promise of a night out.

Using deconstructed funk, pounding drum machines, and New Wave and No Wave horns alike, Kenneth M. Piekarski dives deep into the unease and anxiety of social interactions, community drama, and paranoia. Inspired by iconoclasts like Arthur Russell, Sade, and Prince, Kenneth has turned the party soundtrack inside-out to capture the moods and feelings bubbling underneath any given party – anticipation, elation, and the inevitable, bleary-eyed cleanup, whether it’s you or the sun that’s just coming up.

It wasn’t easy to get here. As Kenneth discovered the American underground, made friends in touring bands, and became part of music communities across Washington state, they created Slashed Tires as an outlet for these songs, both solo and with a number of ensembles and backing bands. Built on guitar, trombone, and programmed percussion, their sets had the power to quickly convey their singular voice, and took shape over several years in show spaces all over the United States.

In fact, Kenneth crafted the first version of Don't Party at The Unknown, a deconsecrated church in Anacortes, in 2011. However, after returning home to Seattle after the studio sessions, close friends said the record sounded unfinished. Over the next several years, they kept thinking about how to complete the work, but throwing parties for friends and hosting bands from all over the world at their own show space, Heartland, temporarily brought work on the record to a halt.

In the years to come, Kenneth left Seattle, then returned to build and renovate Weird Signals, their recording studio. As they removed the smell of a thousand stale cigarettes smoked indoors during punk shows in what is now its live room, they also reworked, rebuilt, and rethought these songs, turning them into a document of personal growth and new memories.

A collection of extraordinary players - Keyboardist Aaron Otheim, bassist Luke Bergman, and vocalists Lolli Morlock, Katie Jacobson, and Caitlin Roberts - expanded the songs’ worldview and perspective, turning innermost thoughts into a conversation and transforming Don’t Party into something truly rare: a danceable record about the discomfort of dancing alone in a city where no one dances.

With a new layer of fidelity, harder-hitting instrumentation, and other voices to pull Kenneth out of their figurative and into their literal funk, they’re ready to share the definitive version of their musical world.

This is clear from the moment Kenneth’s trombone announces itself on album opener “Problems,” a song about the things that haven’t been working and all the things that get in the way of making music. On “Detonator,” they sing of how no one cares if you don’t go out.

Across the ensuing suite of grooves and synth workouts, they find themselves struggling to navigate confounding situations. When Kenneth says “I can be really self-deprecating,” they’re not lying. On “Maybe,” a field recording gives way to a dialogue about the fact that none of us are owed anything, and on “Prospective Decline,” they try to make sense of flirting with someone – and how easy it is to get wrapped up in expectations and social cues as the world continues to move around them.

On the title track, Kenneth examines the dreaded feeling of not being friends with someone anymore and having to inevitably see them in social situations. “Can we talk it out?” they ask. “Can we speak clearly?” The answer isn’t always yes, but Kenneth has found a new – and utterly unique – way to move forward, alone and together.

Bandcamp Daily  your guide to the world of Bandcamp